How to Play Solitaire

The game of solitaire isn't only for the mind; it is also for the heart. It evokes nostalgia and reminds you of when you played the game for hours. This strategy game has now become even more exciting. You can now play the solitaire game online and win a lot of real money and prizes. Read on to rekindle your memories or to learn how to play patience card game if you are new to the game.

Solitaire, called patience in Great Britain, is a single-player card game. The game might have different variations, but all these variations have similar characteristics. The ultimate objective is to win by building the whole pack onto the foundations. These foundation piles are ordered by suit and rank. All the cards must be put in the following order: ace, 2,3,4,5,6,7,8,9, jack, queen, king. Read on to learn Patience Card Game rules and how to achieve this goal. There are a lot of solitaire tricks and tips too that can help you improve your game once you have learnt the basics.

To learn to play solitaire, it is important to understand the set-up. In the game, there are tableau piles numbered from 1 to 7. The tableau increases in size from left to right, and the number of cards in each pile is the same as the number of the pile. This means the first pile has one card; the second has two cards and so on. The seventh pile is the last pile and has seven cards. This means the first seven cards will create the seven columns of the tableau. The eighth card distributed will go into the second column since the first column already has its one and only card. Once the tableau has been set up, the cards should form a cascading staircase, which is a reverse staircase starting from the right. The top card on each of these piles faces up, and the cards below these are placed face down. The remaining cards are kept face down as a stock. The waste and the foundations start without any cards on them. Refer to the picture below to understand the set-up of the solitaire game. 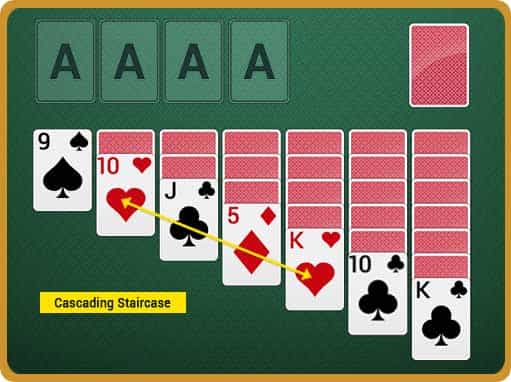 • Stock/Stockpile: The cards remaining after the setting up of the tableau are called the stock or stockpile. You can draw cards from the stock and use them in the game. Refer to the picture below to understand it better.

• Foundations: Foundations are the set of cards in the top right corner. In order to start a foundation, an ace must be played. Following this, only cards of that suit can be placed on that foundation.

• Waste: Cards from the stockpile that have no place in the tableau or on the foundations are laid face up in the waste pile. Solitaire rules are simple. You can also bookmark this page and always refer back when in doubt.

• The initial array may be changed by "building," i.e., transferring and making tweaks in the face-up cards in the tableau. Certain cards of the tableau can be played immediately, while others may not be played until other blocking cards are removed. For example, of the seven cards facing up in the tableau, if one is a nine and another is a ten, you may move the nine and put it on top of the ten to begin building that pile in sequence. Since you have moved the nine from one of the seven piles, you have now unblocked a face-down card. This card can now be turned over and played. 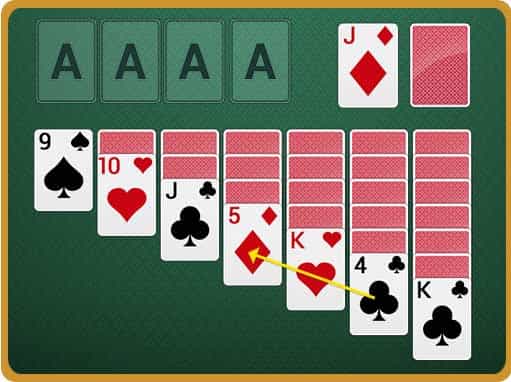 • Solitaire rules allow a group of sequenced cards to be moved and placed on top of another card in the tableau, given it is of a higher rank and a different color. For example, a sequence of the 9 of Hearts and the 8 of Spades can be moved grouped with the 10 of Spades. If a column in the tableau has only faced-down cards, the last card in the column can be turned over and played. 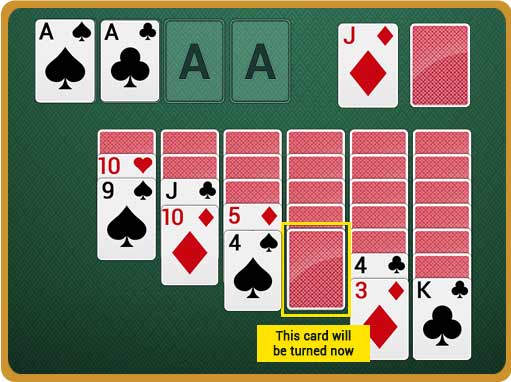 • If a column in the tableau becomes empty because of moving a card/cards elsewhere, it is called a space. It is of major importance in managing the tableau. An important solitaire rule is that if a space is created, it can only be filled in with a king. Filling a space with a king could potentially unblock one of the face-down cards in another pile in the tableau.

• To win the game, continue to transfer cards in the tableau and use the cards from the stockpile until all the cards are built-in suit sequences in the foundation piles.

•That’s it! Aren’t the rules easy and the game fun?

Calculation of score and cash winnings

You can not only enjoy playing your favorite card game and win solitaire cash real money on Solitaire Gold. Here’s how your score and points are calculated and your cash winnings are determined on Solitaire Gold.

In addition to these solitaire rules, there are also points for finishing the game which is known as the time bonus. Here, 1 second is equivalent to 1 point.


How to Play Solitaire on Mobile

Solitaire Gold is a simple and fun variant of the solitaire game. It can be played on the mobile anytime, anywhere. Just go for a solitaire download and install the app on your mobile. Sign up and enjoy playing solitaire on your mobile at the time and place of your choice.

You do not require a set of physical cards to learn to play solitaire. You can play free practice games on the mobile before playing cash games.

We hope you found all the information you were looking for and you’re ready to play the exciting game. Happy gaming!

A standard deck of 52 cards is used to play solitaire. It doesn’t have any jokers.

This message is displayed when a player plays using an Internet connection whose IP address is located in Andhra Pradesh, Assam, Odisha, Telangana, Sikkim, Meghalaya, Nagaland or Tamil Nadu.

The Solitaire Gold team is available around the clock to resolve all your queries and issues. For any further help with multiplayer online solitaire games, please email us at support@mailssolitairegold.in Our Customer Support representatives will get back to you within 48 working hours with a comprehensive solution.